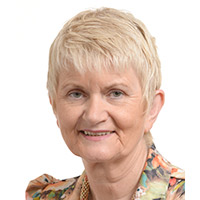 Marian is an Independent MEP representing the 15 counties of the Midlands-North-West constituency in the European Parliament– Donegal, Sligo, Leitrim, Cavan, Monaghan, Roscommon, Galway, Mayo, Longford, Westmeath, Meath, Kildare, Louth, Laois and Offaly. She is now in her third European term following the 2014 European Election in May and previously represented Sligo/Leitrim as a TD in Dáil Éireann.

Her legislative work has included the EU Globalisation Fund where she was Parliament chief negotiator. This fund has been set up to assist redundant workers to access education and training or to start their own business. She was the main instigator of the application for Irish construction workers, a fund in excess of €30 million and is currently working on the feasibility of further applications.

In her last term in the European Parliament as a member of the Agriculture and Rural Development Committee Marian actively worked on the Common Agriculture Policy and the Rural Development Programme where she supported a more equitable share out of the Single Farm Payment to help ensure the continuation of productive family farms and is strongly supportive of maintaining the current LEADER model of community led local development. Although no longer a member of this Committee, Marian will continue to actively follow its work and agriculture issues that are important for Irish farmers.

In her work on the Petitions Committee, Marian has facilitated many petitioners in having their voices heard and their cases examined at European level. Part of her work involves connecting ordinary citizens to the EU Institutions to try to resolve issues where there is non-compliance with EU legislation and she has achieved a number of successes in this area.

As well as her legislative work Marian has a deep interest in Social and Public Health issues. She is Chair and founding member of both the Carers Interest Group and the Volunteering Interest Group and is also Vice Chair of the Cervical Cancer Group, Mental Health Group, Epilepsy Support Group, Human Dignity Working Group and Complementary and Alternative Medicine Group. She is a member of the MEP Heart Group, LGBTI Intergroup and MEPs against Cancer Group, the Intergroup on Ageing and Solidarity between Generations and the Social Economy Intergroup.

As Vice President of the Disability Intergroup Marian is spearheading an initiative to have an EU Commissioner for Disability and has actively worked on accessible public websites, the European Disability Card and using the Parliament as a vehicle to pressurise Member States to ratify the UN Convention on the Rights of Persons with Disability.

Other areas where Marian remains active include her support for Credit Unions, her support of independent living for persons with disabilities and for adequate services for children with special needs. Marian visits schools on a very regular basis to debate and explain her work and makes every effort to link in with and support community endeavours.